As of 04/03/2009, I finished building a 16-core workstation for my wife. What was interesting about this little project is that the machine’s cost ($1550) turned out to be so much lower than made-to-order machines (eg, from Dell, HP, etc.). So, I decided to share my experiences here. In this case, the main benefit of building-my-own was that 8000-series Opteron CPUs were much cheaper on the used market. This reduces the total parts price by about $1600 ($400 times four CPUs). 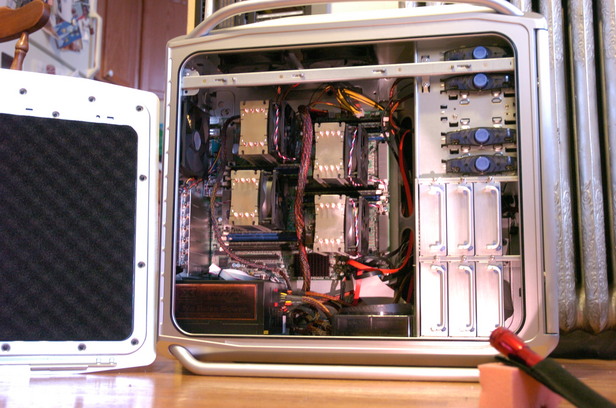 If you look carefully you may notice that, at this point, the wrong RAM slot combination was being used. This has been corrected.

All parts (except CPUs and hard disks) were bought new from newegg for a cost of $1100 plus shipping. If you want to use all four sockets, you need 8000 series Opterons; these are very expensive new (over $500 each) but can be found for about $100 each on ebay used. That brought the total cost to just over $1500. Not bad for 16 cores.

My colleague James Swaine ran some performance experiments on this machine which were published at OOPSLA 2010 in the paper Back to the Futures: Incremental Parallelization of Existing Sequential Runtime Systems.

So far, this system is running great with CentOS Linux 5.3 and OpenMPI. It is silent, stable, and surprisingly power efficient. It draws only 1.5 amps of current at idle which translates into 165 watts. When fully loaded, current jumps up to 3.2 amps. These power numbers include only one 7200rpm hard disk and no graphics card. One thing that this machine does not handle well is graphics. The onboard XGI volari video is a joke, so I installed a basic NVidia quadro card in the PCI express slot.